I had a weird dream one night where the world was ending, the stars were falling, and the Four Horsemen were leading the Apocalypse. I was looking to enjoy the “world’s last donut” but found that someone had taken it from me without me noticing. (Very much dream nonsense.) While I was angrily trying to find the person who stole my donut, I saw a fifth Horse-Rider carrying a torch and scorching the earth. (She probably was the one who took the donut).

When I drew this, I didn’t intend to formally share or complete it. I thought the drawing didn’t fit in with the rest of my work and that it’d be better to keep it to myself while I figured out more of my own visual vocabulary. I was only motivated to completely color and publish the drawing because I wanted to move past the idea of tonal dissonance that I was unfairly assigning to myself and my work. Draw what you want!

The color is worked in separations because I planned on Riso printing it. It was challenging to color because I wanted the linework to feel significant in the image. I went through many different versions and tried a few color studies for about a week before finally deciding on red, pink, and yellow ink in the background only. For using only three colors, this illustration has been one of the longest I’ve ever worked on from start to finish. But I learned something and that’s what matters most to me! 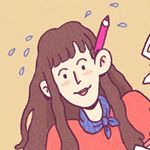