"Portrait of a Young Woman in White"

Earlier this year I read My Year of Rest and Relaxation by Otessa Moshfegh. Or rather, I listened to it – I’m drawing all of the time, so audiobooks and podcasts are part of my daily routine. Needless to say, I was a big fan of the novel and ended up making an illustration inspired by the cover design.

My Year of Rest and Relaxation first caught my eye when I was visiting this surprisingly cool bookstore in Spring Green, Wisconsin. (Which a great place to visit if you’re into Frank Lloyd Wright). The cover has two primary elements- a neoclassical painting of a seated woman, and neon pink sans serif text. As a lover of book cover design, I was like, “Whoa. That’s some bold shit.”

It took me six months to get around to reading it, but the design stuck in my memory. I later learned that the painting was by Jacques Louis David, who most of us probably learned about in Art History class. After descending into an Art-History-Wikipedia-Spiral, I became a little obsessed with this painting. It’s called Portrait of a Young Woman in White.

The painting became so fascinating to me because the “young woman in white” seems SO BORED. Maybe even annoyed. While at first glance she seems to fulfill the role of the anonymous and beautiful figure model, her expression betrays her. She’s beautiful and she’s bored- which is exactly what the novel is about. It also happens to be one of my favorite ways to illustrate women.

I based my illustration on the painting, but put my own spin on. I traded her sheer nightgown for a matching underwear set of my own design (designing outfits is one of my favorite things), gave her an iPhone with a gold case, dark nail polish, and a nameplate necklace that spells “Jacques.” Modernizing such a distinctly neoclassic portrait was incredibly fun for an art nerd like me.

I like to believe that everything in my life informs my illustration practice, even if it isn’t obvious. Sometimes you randomly pick up a book and it inspires you more than you could have predicted. Sometimes you get super excited about art history years after you took an art history class (where was my enthusiasm when I was in college??). I oftentimes focus on how my work will appeal to an audience. It’s just part of the job when you’re working with clients. But it’s incredibly refreshing to dive into what appeals to me. Even if it seems niche and dorky! When I make work that’s genuine, people can sense it. So they connect to it. And at the end of the day, the connection is my favorite part. 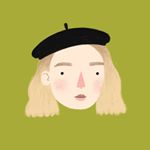