This illustration came about while I was thinking about when I was a teenager in the 90s and I was fascinated with watching Extreme Championship Wrestling on a staticky public access channel called Hoosier TV 53. ECW was a very violent professional wrestling promotion based in Philadelphia that was directly ideologically opposed to the more sanitized and cartoony WCW and WWF promotions. It was mean, and bloody, and aggressive. It felt very dangerous and real, and watching it on a channel that barely came in and looked like maybe it was a pirate feed or something added to the appeal. I actually spent a lot of time watching that channel because they would also show uncensored anime, albeit hidden by static most of the time, that I had never heard of. So this image is an idealized version of my teenage bedroom. I didn’t really have the big ECW flag, or a picture of Masato Tanaka on my wall, but I did have a lot of VHS tapes of wrestling matches. Including the one next to the tv called Stranglemania, which was a bunch of 80s japanese deathmatches dubbed with commentary by the two guys in ICP. I had bought it at a record store before I had any idea who ICP was.

A lot of my personal work comes from me thinking about my relationship with the media and artforms that I consume. I’ve watched professional wrestling my entire life and so it has undoubtedly played a huge role in influencing my art. I started to realize that influence while I was an MFA candidate at MICA in 2013. There was a heavy emphasis on figuring out who you are, why you like the things you like, how to vocalize that and think critically about it, and how to create artwork with those quirks and passions in mind. Since then I’ve leaned fully into my passions and have used them to create work that satisfies me. And I’ve found that while not everyone may connect with the work, those that do seem to connect with it more deeply than work I’d made in the past that was done in the service of chasing a trend or to please someone other than myself. 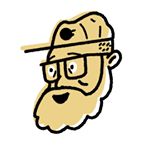