The client asked me to create an image to illustrate the presentation about domestic abuse in Russia. Domestic abuse was decriminalised by the Russian government two years ago that caused increasing of the cases when women were beaten to death by their partners, many Russian pro-feminist organisations and woman – lawyers are standing against it.
For me personally it was one of the reasons I’ve left Russia, I have a history of domestic abuse in my family, I know how helpless women and children feeling themselves, and by signing this law our government has betrayed us.

The illustration shows the woman that is sinking in her partner’s shadow, they’re one-by-one in the bedroom, the man shadows on the bed because this is the most intimate place in the home. I don’t know how this happened but I drew my parent’s bedroom, my mom told me that it looks very familiar, but it was unpurposed.
I used the texture of water to emphasize the idea of sinking (usually I don’t use textures that are not made by me)

I like to use metaphors in my work, I think a good metaphor is the basis for a good editorial illustration. I have also included the unfinished illustration (I don’t make sketches), maybe someone will be interested to take a look. 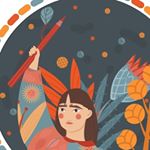