Heavenly underwater creatures abound in my illustration for “Naamah” by Sarah Blake in the New York Times Book Review. The book is a feminist re-imagining of the Old Testament story of Noah’s ark, putting Naamah, Noah’s wife, at the center of the tale. Her world is divided between the harsh, mundane realities of daily life in the wake of catastrophe and a dreamy personal life populated by underwater angels and birds that speak.

For my illustration, I wanted to focus on the more mysterious elements of the story. Naamah explores a secret underwater world, swimming with strange angelic creatures, struggling to move forward now that everything familiar has been replaced by endless water.

I loved that this assignment allowed me to get a little weird with the subject matter and draw on some of my favourite unusual sources of inspiration. I spent a lot of time perusing old illustrated manuscripts and medieval bestiaries while working on the creature designs. The winged fish was based on a design in a 13th-century Arabic text called “Marvels of Things Created and Miraculous Aspects of Things Existing” which is full of weird and wonderful creatures. The snakey star-faced being was inspired by illustrations in a really wild 17th-century German alchemy manuscript called “Clavis Artis.” The whole set of illustrations is up on the Wikipedia Commons – go look at them, they’re so bizarre and fun and beautiful! There is so much wonderful inspiration in the history of art. I make a habit of collecting anything that catches my eye, either in book form or in folders on my desktop, so as a result I have quite a library to draw from when I need it!

I included some of my sketches for the piece so you can see the iterations I went through to get to the final composition (plus a couple more strange creatures that didn’t make it to the final). 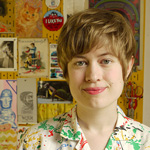