This illustration was commissioned by British choral singing group Ora Singers, in support of the launch of their new album. The brief was to visually interpret their recording of the motet ”Spem in alium”.

I chose to interpret the piece solely based on the associations I made while listening and let my mind daydream freely.

The emotions that stood out were calm and lightness, feelings I coupled with the flight of birds. I imagined what it would be like to be weightless and to float through the air, like an aerial woman.

The motet is sung by forty voices, the choir shifting between singing in unison and splitting up, each individual voice singing and keeping silent in turns. This rhythmic quality reminded me of murmuration, a phenomenon observed in flocks of birds, in which the flock flies in coordinated patterns through the sky, like a sort of dance.

This was ultimately a very enjoyable creative exercise, one which I have used subsequently when feeling stuck or artistically blocked. 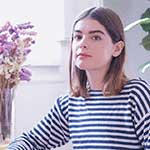