In this illustration, I’ve explored some of the ideas that crop up most often in my personal work.

The jumping-off point for this image was the theme of International Women’s Day. I wanted to bring nature into it, but also concepts of duality and balance. I like the idea of an image formed by negative space – or an optical illusion, where one way of seeing something is fleeting.

This image is also about a ‘daylight’ side of things and the ‘night’ side, or the tension between the conscious and the unconscious. It’s symmetrical in the shapes but not in the colouring – a conversation between the two sides, meeting in the middle. I hope that it contains a kind of liminality. I think that this image could be read as relating to the individual, e.g. a personal transformation, or broader group identity, e.g. woman, and the way that transforms and evolves is always in flux.

It was a very intuitive image to make, as I find I go quite readily to symmetry and particular motifs such as flowers and birds, and from there it was really a matter of trying to feel the way towards a composition. 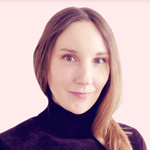