In the final year of my Illustration degree, we were asked to engage in a self-directed personal project, about whatever we desired. Cloaked in the guise of freedom, this project was the most difficult of the year. It had so much riding on it, and we were not able to begin until we had an idea, but not just any idea, a good idea, and an idea that could carry us through the next 6 months until our degree show.

After spending far too long searching for grand, divine inspiration, I decided to look smaller and take inspiration from something that I enjoyed personally, like my daily trips into college, listening to a podcast. At the time I was listening to what is still my favourite podcast, 99% invisible: a creative podcast about everyday, mundane pieces of design. Inspired by one episode in particular surrounding “hostile design,” I decided to focus my final year project on design in cities and its relationship with the public. In order to create these pieces of hostile design, inhabitants have to want to change something about where they are living; something about how they interact with their city has to elicit negative emotions.

With further research I ended up creating a series of Illustrations that I titled “Topophobia”, a word that cropped up in my research meaning “fear of place”. Specifically I created a piece that depicts the grievances of people in my city. I did this by asking what a walk through the city was like for them, and what made them feel uncomfortable. I found their responses could be divided into four categories: The People, The Roads, The Crime, and The Monotony. These are the titles of the four images, with direct quotes from the individuals interacting with the illustration. 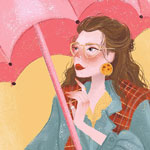