Much of my personal work is inspired by a connection to nature. I usually aim to portray cheerful feelings in my pieces, often using the human figure to personify concepts and create intriguing images for others to relate to. I use bright colours, grainy textures and whimsical details to create a sense of magic and lightness in my work.

This particular piece was made towards the end of March 2020, during the beginning of the Covid-19 lockdown in the UK. While this is an extremely stressful time for so many of us, I wanted to create a piece of work inspired by one of the more positive side-effects of the virus. Such a drastic change in the majority of the population’s lifestyle has resulted in far fewer cars on the road, planes in the sky and factories emitting polluting gases into the atmosphere. There have been reports of the canals running clear in Venice, of the Himalayas being visible from once smog-smothered cities in India, nitrogen dioxide levels reaching record lows in China, and wildlife repopulating areas where they have not been sighted for decades.

This news, combined with the idea that this period of time could be reframed as a chance for many of us to rest and take stock of all that we take for granted, provided me with the inspiration for this artwork. I was inspired to create a personified representation of the earth being allowed the chance to rest and restore much of the damage that humans have inflicted on the planet due to our consuming lifestyles.

My idea was to show a positive, hopeful image which would resonate with and inspire others to imagine a better and completely possible future for our planet; one which is treated with respect, and allowed the time and dignity to regenerate and flourish. To do so we must choose our planet over profit, community over greed, and reinvent systems accordingly.

Creating this piece was a very cathartic experience which allowed me to focus on something positive during a stressful time, helping to lift my own spirits as well as hopefully helping others to lift theirs. 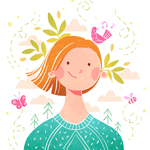