This is an illustration for a teen’s novel where I should portray a poor girl who loves painting. In the novel, the girl discovers an old book by chance with brocade patterns on it. Since then, every night under the dim light, she traced those patterns: Phoenix, Qilin, jade rabbit, flowers, and so on. I wanted to show what she sees in the book, what she draws and what’s inside her imagination, all on the same image, all alive and vivid.

Though the patterns in the book are traditional with brocade texture, I didn’t want my illustration to be so old fashioned. I chose to illustrate the patterns in a flat way, with a bright and contrast color palette, so that the whole image remains decorative, powerful and modern.

This girl in the painting made me think of my childhood. I was like her, always drawing, imagining. Time didn’t exist. The outside world was not important. The lighting was weak. But the images in my mind kept flowing and dazzling. We are happy when we focus on what we love. That was the case when I was a kid. However, when I grew up, things changed, I put down my brush and got lost for a long time. Only since I started making illustrations a few years ago that I’ve recovered the passion of my earlier years. I want to record this status by this illustration and keep it going. 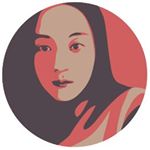