One day I was researching old movie posters and an idea for this illustration popped in my head. I saved it in the form of a quick doodle in my sketchbook. I thought switching the characters in this iconic King Kong scene was funny and made for a nice symbol of women’s empowerment. As soon as I doodled the scene, I forgot about it.

Sometime later I landed a commission for the newly starting Lekka Gallery – an erotica-themed art store focused on selling works containing light nudity handled with humor and body positivity. I found the assignment exciting but I was struggling to come up with ideas going beyond female bodies converted to simple geometric forms. Then, I stumbled upon the doodle while browsing my sketchbook. The original drawing had the lady clothed, so it didn’t quite meet the commission requirement, but that could easily be fixed. It made sense – in the original scene the giant gorilla certainly didn’t sport any clothes, and I’ve felt that showing the woman nude made her even more empowered. I also switched the original Empire State Building with the Palace of Culture and Art in Warsaw, Poland. Polish government’s abortion ban sparked massive protests across the country and many of the women’s rights marches took place at the foot of that building. I wanted to emphasize that in the poster as a sign of support for women’s rights in my home country. The gallery was happy with the commission so I hope I managed to create something that’s cheeky on the surface but also has some more serious undertones. 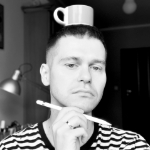