Exafanisi is a series of paintings that I made as a commission for an art magazine called Papier Machine. As I was not paid for it, I took the freedom to do with it whatever I wanted, I had no one to please anyway!

The idea behind the magazine is simple: every issue focuses on a word, which could be anything. The word is communicated to a bunch of artists and will serve as a form of inspiration that will tie all the output together. This way of working is interesting; one can see how differently people interpret and work with language.

Language has always been very important to me when I create. Usually my personal work comes to life when I listen to a song or story and hear a phrase that strikes me. I use that phrase as indirect input, an idea to start a drawing off with. Sometimes I go on, studying the same song, story or video, not only trying to work with actual words but also with the atmosphere built around it. Any language has its own, unique feeling.

Very often the drawing or painting starts changing, while I work. I forget about the original idea and see where the first lines lead me to.

In this case I had to work with only one word; the word ‘éponge’, which is French for sponge. I was thinking about stories with the word sponge, and came up with the first thing my mind often draws me to: the volatility of nature. I had first heard about the documentary ‘chasing the coral’ at that time. It was the beginning of many apocalyptic messages about our ocean’s health. And a sponge is part of the coral’s threatened ecosystem. I thus started working with the utopic idea of sea-life and corals. This would be the first image for the series. I love snorkeling and diving, so I put a lot of my own impressions in this drawing.

Then I wanted to do something with the actual state of the corals, and the way they are decaying. I used a Rorschach-like effect to make it look like a scientific study-object: it’s supposed to look like a dissection of a coral. Everywhere around the world, corals are first lighting up before slowly turning grey and then white. I wanted to use those two phases in the drawings.

I like working with the number 3: a beginning, middle and an end. A triptych can be a story, so I knew I would make one final work. This could be a short look into the future: what would replace those corals, sponges and sea-life? Sadly, we don’t even need to look into the future for that. The oceans are full of plastic and other trash, taking some of it to its surface and the rest to its mysterious depths. I wanted to combine that idea of beautiful mystery and ugliness in the final drawing, and the result is obvious.

The title is something that I thought of afterwards. I went back to the idea of using language as a means to trigger curiosity. This is mainly possible with words from an unknown language, as one would have to look up the meaning of the word. The Greek language is at the origin of many words and languages; a bit like water is at the origin of life. I decided to translate some words into Greek until I found something that sounded right. ‘Exafanisi’ means ‘disappearance’ referring to the disappearing corals. The word feels like a melancholic breath, holding onto a feeling that I recognize in the series. This word can only be made up by people that know about the meaning of tragedy. And, who knows, maybe the sea whispered it in their ears. 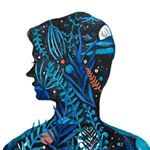