I made this illustration for The Month of Love, 2017. It was the first time I’d been an official participant, so I really wanted to go all out and impress people. Since I put that kind of pressure on myself, I naturally flaked, and the first two paintings I did for it were pretty mediocre. I was kind of desperate by this one, the third, to produce something really cool, so I pushed myself to take risks that normally I wouldn’t, stepping away from reference and drawing in a more stylised manner, and starting from a completely abstract thumbnail. It worked, both in terms of the end result and in terms of how much I enjoyed myself while making it.

The story behind the illustration is Tam Lin, a very old English folk tale about a woman who falls in love with a man and has to save him from the evil Fairy Queen and her black magic. It’s one of my favourites because a woman gets to be the hero. Though there’s a lot of powerful women in myths and legends, they tend to be the evil ones, while the good woman is passive and very often end up dead. Plus, Tam Lin was the inspiration for one of my favourite books, Fire and Hemlock by Diana Wynne Jones, so I wanted to pay homage to that too, in just a little way, with this painting.

My process is pretty simple. I start out with a detailed digital line drawing and then just add colour and texture on top of it, using multiply, overlay, and colour dodge layers, and the lasso, gradient, and airbrush tools. It’s really easy to paint this way because all of the hard work is done in advance. As long as your drawing is good, you kind of don’t have to think at all. However, it has a downside. Most of my files end up with more than 100 layers and being well over 3gig in size. My MacBook is pretty old these days and has a hard time keeping up. 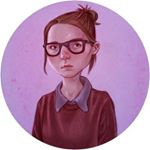