The great adventure of little Mindy

In the year of 2013, I participated in a hiking group and lived in the wild for a week in Arizona. It was a whole new experience for me as I have never done anything like that before. Growing up in the city has made me used to all the lights at night. It was the first time that I experienced the dark in nature, we had to use a flashlight if we wanted to move around. I found it quite fun, the flashlight would only light up the path under your nose, but I heard a lot of sound around me, when I turned to the direction where the noise came from, there was nothing. But I believe many animal friends were there in the dark.  This illustration started with a bunch of doodles I did on paper, I wasn’t very satisfied with them at all, so I just use black acrylics to cover them. But I didn’t want to waste and throw away that piece of paper, so I thought why don’t I draw the light? And then I came up with the idea of a little girl using her flashlight to discover nature just like that time I was hiking.

After I finished one illustration, I want to further extend this to a picture book idea that in every page the girl discovers a new animal. However, after turning the page, she finds out it is just a common object. She doesn’t know that real animals are curiously watching her in the dark. I feel it is very interesting to create a look that the girl is looking for animal friends, and the animals are secretly watching the girl. We as the readers are watching all of these. Who is watching who?

To make this idea more interesting, I want to use cut out technique. On the first page, the animal silhouette is cut out, and when turning the page, you find the truth. I would also want to make a version of fluorescent light on the first page. When the kids are in the dark, they can see a more vivid color. When they turn on the lights and flip the page, they see the normal page. The experience for the reader follows the same action of the little girl. You could explore this book in the dark, and though with a flashlight. Another fun side character is the little girl’s dog. While the girl knows nothing at all, the dog already makes friends with other animals in the dark. This adds a little drama to the book, what will happen in the end? Will the girl find out at last or will her pet dog reveal the truth? You have to find out yourself on the last page. 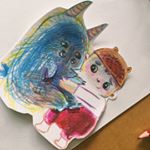