What is it about bugs? I studied illustration at the Savannah College of Art and Design in Georgia and graduated in 2016. My senior year at SCAD I discovered carpet beetles in our apartment. I found the little bugs and their egg cases (Ew!) in my bed. For some reason, our landlord refused to believe that we had an infestation. He kept sending a regular bug maintenance guy instead of an infestation professional. He did finally believe us when my roommate found actual bed bugs in her bed. Great, now we had two infestations at once. For over half a year, before bed I inspected my sheets and mattress. Often I awoke in the middle of the night and shined a flashlight to see if there were any bugs in bed with me. Sometimes I had bug bites in the morning. One night I found a cockroach inside my pillowcase. As if I wasn’t dealing with enough bugs in my bed! I had bug nightmares for a long time after that.

Three months out of college I was itching to pursue comics and decided to make a story about bugs. I couldn’t get them out of my head anyway, why not draw them?! I decided to draw a pillbug because I felt they were the least creepy. After some quick Googling, I discovered that pillbugs are actually crustaceans and a comic idea was born :). The main character is a pillbug named Millie who lives near all of her insect friends. She enjoys tea and has to carry a spray bottle with her to stay hydrated.

I have always been a fan of horror and the macabre but my bug experience was actually pretty traumatizing so I wanted my comics about bugs to look appealing. I wanted to have fun drawing colourful, cute bugs but then include elements of horror in the childlike illustrations.

Studying bugs and capturing their lives in comic form has helped me understand them better and work through the fear I had developed of finding them in my bed!

Read all the “A Pillbug Story” comics here 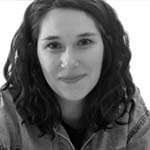