Out there in the dust / Meet me at the milk bar

Recently I’ve had these problems, artistically…

Most ideas I come up with grow completely out of control. What start as small ideas for a short comic or animation quickly turn into epic sagas where I endlessly obsess over minute world-building details that really don’t matter. Especially since these projects never see the light of day.

Another issue is that I, for some reason, never want to draw the same character twice and spend way too much time over designing them, compositionally this also causes some problems because I want to show these freshly designed characters from the front and as clear and unobstructed as possible. This usually makes for very boring and sterile work.

The last problem is that my technique is usually all over the place, and starting a new piece often not knowing exactly how to approach it got a bit…. tiresome. I really wanted to start working in a more minimal and stylized way.

So I came up with this idea to draw my two cats, Hasan and Havadar, going on adventures. As if it were concept-art for a non existing game or animated series. This allows me to not worry about the deeper lore since it will develop as I make pieces in the series, I don’t have to fuss about designing new main characters again and again and finally I get to dig in a particular design aesthetic since the series needs to be at least a bit coherent visually.

The project name; “Out here in the dust” is something that I’ve recycled over the years, it started out as a animated webcomic, transformed into a video game of sorts, changed to a printed comic and now ended up as this project.

Maybe I’ll eventually make a small book out of their adventures, but for now I’m really enjoying the process and seeing where it takes me (and my cats).  I’ve actually never been more motivated to work on a project. 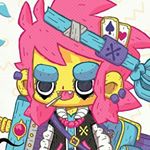