I created this illustration as an entry to the art challenge called ‘Powerful Women Week’ on Instagram. When I joined the challenge, I started to think about what feminism means to me and what kind of influence feminism can make on society. Suddenly, I came up with an image that patriarchy is a huge and deep cave that we humans are all trapped inside, no matter what gender we are. In the cave, people could not recognize that we are being confined to the patriarchal system because it is so natural to us. We are born and raised in this system for a long time, and the longer we stay in the patriarchal cave, the more we are used to it. People did not recognize being oppressed until one day, feminism appeared. Feminism is like a leader, a spiritual guide, who tells us there is an outside world where we do not have to be oppressed. She tells us not to be afraid, and also, she will lead us out of this cave of patriarchy.

I decided to illustrate the scene because I think it must be my answer to the questions above. I was one of the people who did not know that we are living in the cave. Then, my life has been changed since I met feminism in a literature class in college. From that moment, I began to know that we are trapped in patriarchy, and we should do something to get ourselves out of it. This artwork presents the reason why I became a feminist artist, and also the answer to what feminism means to me. 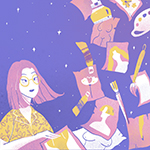