Tap is a children’s book which I have written and illustrated. The book is all about a little woodpecker, named Tap, who wants nothing more than to sing with the other birds. But, Tap is a little different to the rest of the birds, and must learn how to accept the things that make him unique.

I hope for the book to encourage and celebrate difference and individuality in a colourful way.

The inspiration actually came from another children’s book I had illustrated (called Nature’s Nasties) I had sent off my initial character designs, most of which were accepted. But myself, the author and the publisher decided that one of my character designs needed entirely revising so he would fit more synonymously with the other characters. Months later, whilst I was looking through my sketchbook, I rediscovered my first character design of a little woodpecker. I was so fond of him, and felt like he deserved his own little story. The story line all developed from the fact that he was a little different, and I just decided to run with it from there.

I’m sure that we have all, at some point in our lives, felt a little out of place. Sometimes it can be difficult knowing where exactly you ‘fit in’ to society’s norms. It’s really great to see that we, as a whole society, are becoming much more accepting of things which were archaically unconventional. I knew from the beginning that I wanted this children’s book to have an uplifting message. I knew I wanted the book to encourage children to be more compassionate both to others and to themselves.

Quickly, I had gotten very invested in this little birds life. And I decided that I wanted to write and illustrate the whole book. My illustration process changed a lot for this brief, I allowed myself to be a lot more experimental with collage, paint and digital media. I felt free knowing that I didn’t have the usual looming deadlines or expectations, which allowed me to really relax and just play about in my sketchbook.

The result was a technique that I developed of mixing collage, painting and digital art. And I still use variations of this technique in my work to this day. 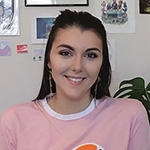