This piece was a self-initiated brief in response to a university project about urban myths. For the project, I could either find an existing urban myth or make up my own and create an illustrated response.

I knew I wanted to do something about London, and after some searching, I came across an old myth that if Big Ben struck 13 times the Landseer lions of Trafalgar Square would come alive and run rampant around central London.

To begin I took the tube to Leicester Square and hung out while the sun was setting and did a bunch of drawings of the lions and then when the sun had set I explored around some of the older roads in the area and took a bunch of photos to future reference. I knew I wanted this piece to be outside and at night – two things I haven’t had many chances to explore in the past – and I wanted to play around with lighting sources and shadows to give the whole thing an eerie feel.

After a bunch of sketching from the street photos I took, I sketched out a rough version of this composition on paper before transferring it to my computer and onto Paint Tool SAI. I then started layering up blocks of colour and tons of windows before finally adding in the lions to the foreground.

I was quite chuffed with how it turned out! I hadn’t done much background design before and ended up really liking the composition of the lions with their backs to the viewer as it really felt like the viewer was involved in the scene. 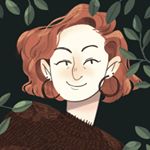