Last fall was a period of time when I was really grappling with feelings of self-doubt in my potential. It was also around apple-picking season. The two experiences felt related somehow, so I decided to make a comic combining both concepts. This grew into “Apples to Apples,” a short little comic about an apple feeling not up to standard during harvest season.

For better or worse, a lot of people related to this comic. The pressure to be in the same league as one’s peers is a pretty universal one. I wanted to write a narrative that captures that feeling, while showing not everything we feel is true to real life. Maybe it’s not your season yet, or maybe your calling isn’t the same as your friends’, or maybe you have brain worms—who knows! If every apple were identical, we wouldn’t have cider, or applesauce, or vinegar, or even simply more apples. I think it’s good to keep an open mind to the possibilities in life, because those could be your possibilities too! 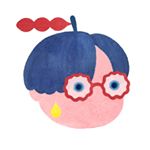