So this illustration I did at the beginning of last year for an exhibition called “Neue Märchen”, which translates to “Modern Fairytales”. In addition to three illustrations of fairytales that were written by fellow students, we also had the chance to contribute an image of one of our favorite fairytales – and mine was “The little mermaid”.
But not just any little mermaid, I chose the Czech movie version (“Malá morská víla”, 1976), which I first watched as a child. In German TV there were running a lot of Czech fairytale movies and I watched pretty much all of them. Even though these movies didn’t have a huge budget and hadn’t got any technology that we are so used to now I thought and still think that these films were especially magical. All the restrictions contributed to their creativity, they were often abstract and rather cruel but in a way that fascinates a child and engages them.

So when I watched this movie for the first time I of course already knew the story. Just not the real one, the Disney one. And so it came as a huge shock to me, that in this film, which was more true to the original Anderson fairytale, everything ended quite differently. In the end, the little mermaid was confronted with the decision to kill her opponent, who wasn’t the witch but just another girl the prince confused as the one who saved him, even though it was the mermaid who did truly save him. And even though he actually loved the mermaid, he didn’t marry her because he thought it was morally wrong. And so the mermaid people said, that she could flee her destiny if she killed the other girl. She didn’t do it, instead, she forgave the prince for his human mistakes and wished them a happy and long life. And so she turned to foam on the sea.

Little me was shocked. I couldn’t believe it. It was the first time ever I saw a movie that didn’t end well. But it didn’t leave me in tears, I wasn’t angry or anything, no, I thought it was the most fascinating and beautiful thing I ever saw. I made my mother write a letter to the kid’s TV channel, so I could watch it again (which sadly didn’t work).
And I think since then I have an ongoing fascination with tragedy. I believe, this movie triggered this sense of moral beauty. I since loved these tragical characters who ended badly even though they did the right thing. They followed the path they had to go and it didn’t matter how it ended, because the true beauty lied in the passion and commitment in which they followed it. Only by letting it end in tragedy it became clear, that they didn’t do it for the outcome, but because they had to do it, because it was right. I always loved this idea. Since then tragedy was a key point in everything I loved, from Gone with the Wind, to Wuthering Heights to Ingmar Bergman movies to the music of Joan Baez.

And so, when I researched for the illustration one year ago I saw that the movie I watched as a child, the original “Malá Morská víla”, was in full with subtitles on youtube. Imagine my joy! It is so weird and great to watch something again that you have last seen as a child.
I was so happy to see that the movie still held up. Even more, now I could appreciate the great cinematography, the costume design, the original language. I loved it even more.
So this is the story behind this illustration. I portrayed the part where the little mermaid was washed up to the beach and found soon after by the prince and his dogs, unknowing of the fateful journey she began. 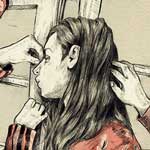